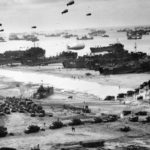 American, British and French armies, fighting through Africa, invading Italy, surrounding the chunk of Western Europe held by the Nazis. They bombed Germany with regularity but knew they had to get a foothold on the continent before coming to grips with the Hun. Russia was pounding on the eastern front and American soldiers were coming […]